The fourteenth International Sculpture Biennale of Carrara, Italy gave van Braak the opportunity to pursue his interest in historical obscurity, distortion, and disappearance in which architecture plays a major role.

The history of marble penetrates all aspects of life in Carrara up till the present day. Van Braak build a grand façade (20 x 10 x 6 m) in front of one of the empty buildings that the Biennale provided for. It has been build too show the façade as a façade, as a piece of scenery of a film-set. Therefore, an important aspect of it is that you can walk through the façade and see behind it. Moreover, the architectural design is based on the modernist architecture of the fascist period. Yet, that is only its outer shell. The façade doesn’t hide anything, it reveals something. As soon as you walk through it, you see both the ruin behind it and the construction of the façade itself. During Mussolini’s dictatorship these kinds of façades were build for events and speeches to propagate the fascist idea(l)s. The current president uses façades for propaganda purposes as well. He commissions settings for gatherings and conferences that seem to underscore that his rhetoric and body language are modeled after his notorious predecessor. This isn’t a noncommittal comparison, but neither a direct one. It would be more than shallow to align the populist Berlusconi with the dictator Mussolini. Nevertheless, van Braaks façade and the run-down building behind it serve as a metaphor for the empty rhetoric and the decay of both the fascist ideology and – partly independent from it – Berlusconi’s power politics.

Van Braaks façade wants to be an exercise in modesty. In the heart of the century-long marble production industry he didn’t use marble. Instead of using marble, that for ages was considered the most prestigious medium in which you could work as a sculptor, van Braak built a façade out of wood, a very modest medium. It is opposed to the aura that is necessary for fascistic décors and the pompous settings that Berlusconi uses. The temporary existence of a façade is normally made invisible. As you can walk through and around my façade all the irregularities stay visible. In that way, the material itself prevents every megalomaniacal claim. As a façade it is a farce.

The façade also touches upon the reality and the implications of the declining marble production industry of Carrara, which is partly the consequence of the modern-day decline in the demand for monuments. It has mainly become a part of history, something that belongs to dictatorial regimes. The resurrection of political monuments in the ‘classical’ sense (equestrian statues, busts of heads of state etc.) hardly exists in the West anymore. Architecture filled that gap for an important part. Architectural objects are becoming the monuments of a city or society. What it shares with political monuments is monumentality and, in principle, eternity. Yet, it also differs to an important degree. A façade is in essence a sculpture, because it isn’t a factual building, but it also refers strongly to architecture that it is and imitates to be at the same time. It is a temporary monument, so to speak, a contradiction in terms and factuality. Perhaps this Facciata is therefore the only possible way to erect a façade as monument for contemporary Italy. 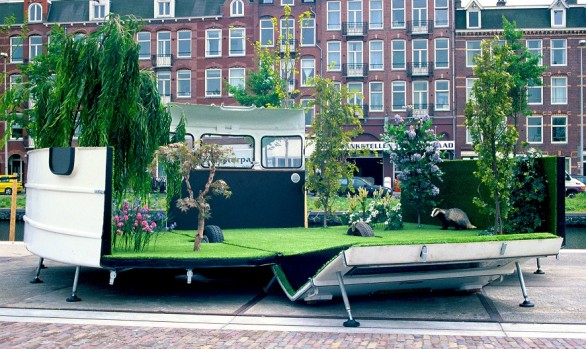